More Lessons from 2nd Parks on the Air Activation

One of the great things about amateur radio is the constant learning and skill improvement that is an inherent aspect of this hobby. Setting up a shack in a home is one thing but operating in the field is quite another adventure and requires new skills and sometimes even a different frame of mind, a liberal sprinkle of patience, and a high tolerance for cold weather (if you're out this time of year in the more northern latitudes.) 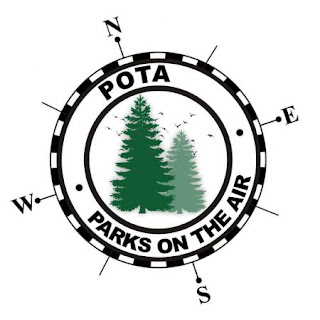 On January 22 I activated my second park for the Parks on the Air (POTA) program. The temperature outside was a cool 37F/2.7C, but at least the sun was out making it feel like a rather balmy 37F day. And, with no rain in the forecast and sunshine what more reason do I need to go outside and play? So, I packed my POTA kit and drove the 13 miles to Saltwater State Park in Des Moines, Washington. This was my first time to this park in the 24 years I lived in Washington. That is pretty sad now that I think about it because it is really a beautiful little park.

When I arrived around 12:30 pm there really weren't that many people, and most were walking on the tidal flats or with their kids playing at the playground in a different section of the park.  I grabbed a parking spot right next to the beach and unloaded my kit onto a picnic table on the small grassy field overlooking the log strewn beach. I chose a spot close to the edge of the grassy area next to some logs because I thought it would be out of the way despite being front and center. 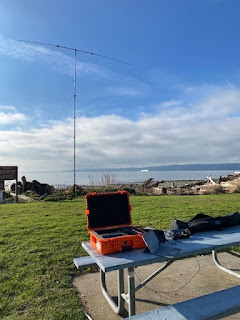 Once again, I setup my Buddipole dipole antenna for 20 meters on the edge of the grassy area. Two of the guy lines were secured along roughly the same parallel as the mast, and away from foot traffic.  The 3rd guy line I ran back to the picnic table and secured it so the guy line would mostly be above head height just in case someone felt compelled to walk across the 10 feet of grass between me and the antenna.

In my first POTA activation I operated QRP, but this time I setup my Elecraft KX3 with the KXPA100 amplifier. I wanted to evaluate how the 2 Dakota Lithium batteries (20Ah total) would hold up while running the amp at nominal 50W in FT-8 mode. Unfortunately, I only operated for 3 hours before my I couldn't feel my fingers and called it a day. Three hours was really not enough time to adequately evaluate QRV duration while running the amp with 2 10Ah batteries in parallel. But during the 3 hours of operation I made 66 QSOs, including 3 Japanese stations, 3 Canadian stations, and 1 Mexican station.

By 3 pm there were a lot more people enjoying the park. A few came over to chat usually starting the conversation by asking, "What are you measuring?" I am thinking that CW is probably a little easier to explain than FT-8 mode; especially since there is zero sound coming from my rig or Surface Go 2 and I'm operating in silence. Most would walk around the antenna and the picnic table, but a few decided to walk directly under the single guy line between the antenna mast and the picnic table most carefully stepping over the antenna cable. Only one 'Karen' approached the antenna mast, looked up at it for a few seconds, then looked at me and started walking underneath the guy and say, "why would the let someone put that up there?" She made sure I heard her complaint because she turned around and looked at me. I smiled and waved. (But secretly I thought to myself they allow it because they think most people are smart enough to walk around it.)

Saltwater State Park is a great place to operate and activate a park despite the almost constant aircraft traffic landing and taking off from SeaTac airport.

I am still learning about portable and POTA activations, so here are some additional lesson's learned: 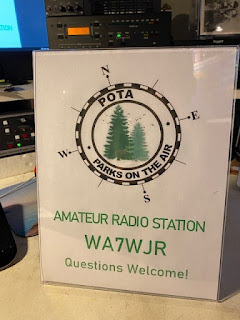 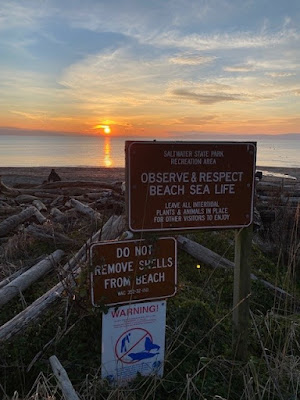