My First Parks On The Air Activation 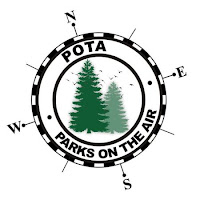 Unless you've been sleeping or haven't turned on your radio for the past 2-3 years you have probably heard about Parks On The Air (POTA). But, if POTA is new to you a simple web search or a CLICK HERE will give you details about the current program. But first, let's delve into a little POTA history lesson.

I suspect many of us recall the ARRL sponsored a year long Parks On The Air event in 2016. But, do you know that the concept of Parks on the Air was around well before that? In fact, the first mention of a parks on the air event appears to have occurred in 2008.

Way back in 2008 the Portage County Amateur Radio Service club in Ohio started
the very first State Parks on the Air contest. The Ohio State Parks On The Air (OSPOTA) contest has been held annually since the time of its inception. Indianna Parks on the Air started on January 1st, 2010, and since then other states such as Florida, Texas, Wisconsin, and Kentucky each have annual Parks on the Air events.

The first attempt at an international Parks On The Air (POTA) program was started on September 15, 2010 by VE3FAL, N4NSS, and W1PNS. The only thing that remains of that program is the webpage at www.hamparks.org.

The ARRL sponsored the National Parks on the Air event in 2016 that was rather popular. In April of 2017, W3AAX was awarded a registered trademark for Parks on the Air, and he and a team of volunteers built a web portal, formed a 501(c)(3) charitable organization, and slowly grew today's Parks on the Air program. The past 2 years 2020 and 2021 have seen a huge explosion in the program's popularity and overall success. Some of the interest may be attributable to the pandemic, but I suspect that much of the success is due to the ease of engagement as a hunter or activator and the sheer enjoyment of getting outside the house to activate a park, or hunting parks for free awards, a rare grid, or just to make add another QSO in the log.

My first recorded QSO with a POTA activator was in December of 2016. I honestly don't recall specifically hunting parks at that time, but there it is. I didn't log any QSO with parks from 2017 through 2019, and then in early 2020 I started getting interested and became a "casual hunter" of POTA. I was in Fiji for most of 2021 and coming back to Seattle in November 2021 and getting on the radio I was amazed at the level of activity and growth of Parks on the Air. Not only was I actively hunting parks almost daily, I started planning my very first activation.

I purchased an Elecraft KX3 with all the bells and whistles, along with a PX3 panadapter, and KXPA100 amplifier for my planned DXpeditions in the Pacific once the islands reopened after this pandemic. So, I already had my "Shack in a Box" ready to go. But I realized I didn't need my entire "shack in a box" kit for POTA activations. I really didn't need the panadapter in the field as I would not be the hunter, I would be the gatherer! Also, I would not be using a generator to activate parks, so I would need some battery power. I knew I wanted LiFePo4 batteries because they maintain a steady voltage as compared to SLA or AGM batteries. Dakota Lithium is located in Seattle, so I paid them a visit and acquired 2 LifePo4 lithium batteries. Now it was time to assemble my POTA kit.

What's In My POTA Kit?

I purchased an Apache 4800 Weatherproof Protective case from Harbor Freight Tools in Seattle. It holds everything except for the Buddipole kit (which should be obvious). While this box isn't ideal for hiking (I'm in the process of researching backpacks for hiking into parks), it is great for "easy" parks that are accessible by car.
I purchased a new Surface Go 2 because it is just easier to find amateur radio software that runs on Windows platforms, and WSJT-X doesn't run on an iPad. The 'loaded' Surface Go 2 was on sale for the same cost as a stripped down Go 3, and the reviews comparing the Go2 to the Go 3 seem to favor the Go 2. On the Surface Go 2 I run N3FJP's Amateur Contact Log and WSJT-X software. Plus, I can install additional N3FJP software contest logs should I ever decide to operate a contest from the field.
The Dakota Lithium LiFePo4 batteries are really a no brainer. The LifePo4 batteries hold a steady voltage for a longer period of time during the discharge cycle which is important if you're planning on operating above QRP for any length of time. Also, I needed at least 20 Ah in order to run the KXPA100 amplifier. These batteries can virtually be completely drained without harm, and recharged more times than a SLA or AGM battery. And, with an 11-year warranty you simply can't go wrong!
I have a Signalink USB in my "shack in a box" kit and initially planned on using that. But then I thought maybe I should downsize the external soundcard. So, I ordered a SoundBlaster Play 3 from Amazon, hooked it up, and it works seamlessly with the KX3, the Surface Go 2, and the WSJT-X software. Seriously, it was almost too easy.
I purchased the Buddipole kit a few years ago when I was travelling frequently to Vietnam and operating as XV9WJR there. I like this kit a lot and can set it up as a dipole or vertical antenna. It's certainly not as light or as simple as an end fed antenna hung from a tree, but it's a pretty impressive antenna for its size. Also, it is very easy to assemble and take down. The KX3 and the KXPA100 both have antenna tuning units in them that are damn near capable of tuning a wooden stick. But the MFJ-223 antenna analyzer allows me to adjust the coils and/or antenna whip lengths to accurately match the frequency I want to work and rely less on the ATUs for matching.
Prepping for the POTA Activation

Prior to heading out to a park I wanted to make sure my first activation would be successful. So, I charged everything and packed my POTA kit. The next morning (well, the next morning it wasn't raining here in Seattle) I took my POTA Kit to the backyard. The Buddipole was up in less than 10 minutes and the radio, amplifier, and Surface Go 2 connected and on the air in less than 5 minutes. From kit to on the air in less than 15 minutes working meticulously and at a leisurely pace. I made 4 FT-8 contacts, then disassembled and had everything packed up again within 15 minutes. 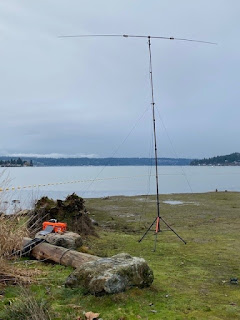 For my first POTA activation I had 2 criteria. First, I wanted to go to a park that was close to my home QTH, did not require hiking, and had covered picnic tables to operate from. (I'm sure many of you have heard the stories of the incessant rain in Seattle...trust me...it's true!) Secondly, I wanted to operate QRP (without the amplifier) in FT-8 mode. Basically, I wanted my first activation to be pretty simple because it's still pretty darn cold here, the skies are in a constant state of ominous gray, and quite frankly I was just thinking it would be a quick activation; a proof of concept so to speak.

With a bit of research on the POTA site I found a few parks within 10 miles of my QTH. Lake Sammamish State Park ticked off all the boxes for location. I drove to the park, and I found an out of the way log to sit on with a reasonably flat rock next to the log upon which I could set the radio and computer. Within 15 minutes I got everything up and running and almost immediately started making QSOs. In 2 hours of operation, I only made 28 QSOs with 1 DX QSO with a Japan station, an AK station, and also a couple southeast US stations. This was pretty good considering Lake Sammamish is just 30 feet above mean sea level and surrounded by mountains.

Despite the cold temperatures (43 F) and wet ground I had fun! A few people came over and asked what I was doing. Some thought I was measuring something, and one woman even asked if I was measuring for changes in water height due to the Tonga volcano eruption and resulting tsunami. (I didn't have the heart to tell her that if that volcano had any impact on the water height of the lake we'd all have more things to worry about.) Another amateur radio operator stopped by and chatted for a bit, and another gentleman asked, "Do you know [name]." I said I didn't know him. He said, "Oh, he's also a ham radio guy in Illinois that I know."