In Late February I flew back to Guam to do some much-needed work on my sailboat, and while here I definitely wanted to activate the 2 parks (K-0762 and K-0110) identified by the Parks On The Air team. The park activations in Washington and Texas were precursors to my 1-man holiday style DX / POTA activations.

The work on the boat took up more time than expected. Also, unusually strong trade winds made putting up the Buddipole antenna rather precarious and presented an almost constant risk of breaking or bending something. And to be completely honest, I did in fact break one extension arm and bend one of the extension shock-cord whips while setting up and a gust came from the opposite direction from the prevailing winds! Finally, although we are not yet in the rainy season, there were numerous rain showers that soaked various the island periodically throughout the day. The short story is that I didn't get on the air and play radio as much as I wanted, but I'm not finished yet and there will be more to come! 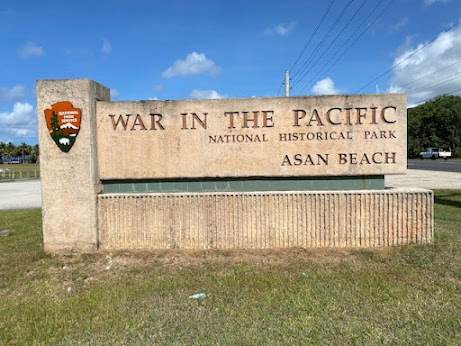 The War in the Pacific National Historical Park is actually 6 separate parks on the island of Guam. The largest of the 2 parks is Asan Beach in the village of Asan. This was the site of one of 2 main landing sites when the US Marines stormed Guam in 1944 to defeat the Japanese. However, very little remains of the fortifications and the area has been transformed into a popular beach park on the island.

On March 7, 2022, I activated the War in the Pacific National Historical Park (POTA K-0762). There are few picnic tables and no pavilions that would provide shade or protection from the weather. After spending a day to reconnoiter the vast park I finally decided on an area next to the parking lot at Asan Point to setup next to some bushes that would provide necessary shade. But the shade didn't appear until around 3 pm local time, and the park closed the gates at 6 pm. So, that gave me a 3-hour window to operate.

I parked next to the grassy area where I setup my POTA shack. The POTA / 1-man holiday style DX shack that travels with me on my sailboat consists of a Helinox Table One Hard Top collapsible table, and a Helinox Chair One XL collapsible chair, a Honda EU2000i portable generator (very quiet), a Buddipole dipole on a Mastwerks 23' mast, a Powerwerx 30 amp switching power supply, an Elecraft KX3 transceiver, an Elecraft KXPA100 amplifier, and a Microsoft Surface Pro 2 tablet for running WSJTX for FT8 operations and ACLog for logging, and a Begali Adventure key for CW ops. The entire setup takes about 20 minutes. Tear down goes a little faster.

The first activation of this park was highly successful with 87 FT8 QSOs on 20M in about 3 hours of operation. Most of the QSOs were Japanese stations, but also include Indonesia, China, Brazil, Austria, Italy, Hawaii, Republic of Korea, North Macedonia, Texas, France, Spain, England, European Russia, Asiatic Russia, Australia, Denmark, and Canary Islands. I would say the propagation was great!

Based on my results from March 7, I returned to the same exact location in the park and setup on March 8. On day 2 of POTA operations at K-0110 I only made 74 FT8 QSOs on 20M. Hunters and DX'ers were from Republic of Korea, Japan, Texas, Hawaii, Uruguay, New Zealand, France, Asiatic Russia, China, England, Argentina, and Taiwan. Unfortunately, I had to stop transmitting and take 3 short breaks because the amplifier overheated. The average temperature in Guam is about 86F (30C) degrees. I only operated at about 50 watts and thought the almost constant winds would keep the amplifier cool. But for some reason on this day, I encountered an overheating problem. 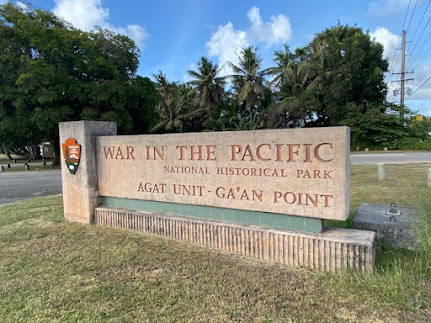 After a long break, on March 27 I activated the War in the Pacific National Historical Park at Ga'an Point in Agat village. This was the second primary landing beach for US Marines in 1944. This park is much smaller than Asan Beach but has the remains of a Japanese 20cm coastal defense gun, an anti-aircraft gun, a pillbox, and small caves where Japanese soldiers slept. There is no gate on this park, and it is open 24 hours a day. There are 2 picnic tables and a public restroom, but no pavilions for protection from the weather. As a big plus, it is a mere 3 minutes from the Agat Marina where I keep my boat.After finding a nice shady location to setup my portable "shack" and the antenna I started operations once again. This time along with the usual over-abundance of Japanese stations, I also had a total of 122 FT8 QSOs with Alaska, China, Republic of Korea, Texas, Washington, Hong Kong, Indianna, Canada, California, Indonesia, Oregon, Taiwan, Brazil, Asiatic Russia, Fiji, Australia, Hong Kong, Scotland, and the Republic of Korea.

All in all, with a little over 280 QSOs logged, March was not such a bad month. 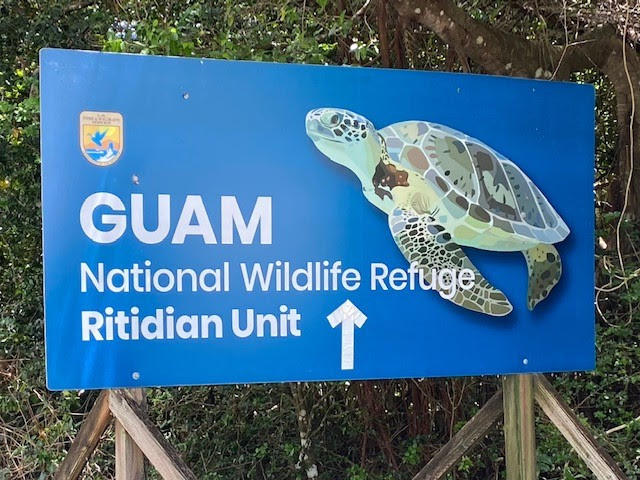 The second identified POTA park on the island of is the Guam National Wildlife Refuge. This is on the very north end of the island past Anderson Air Force Base which occupies much of the northern part of the island. The refuge is open Wednesday through Sunday from 07:30 am until 4:00 pm. Gates close at 4 pm! I drove up to the refuge and was introduced to the superintendent. Fortunately, she was familiar with amateur radio and showing her the POTA website helped explain my intent. She required that I submit a special use permit (something I wish I would have looked into earlier). Once submitted it only took about 1 week for approval. There were lots of restrictions; however, I was able to setup my POTA shack in 'disturbed' areas adjacent to parking areas. Not the most scenic area of the refuge, but I was able to operate inside the park boundaries!Finally, on the afternoon of April 2nd, I drove up to the refuge, setup the POTA shack and started FT8 operations on 20M and made 68 QSOs. Since I had to shut down at 3:45 PM I knew that I wasn't going to get as many European stations as I got at the War In The Pacific parks since most of those QSOs occurred after 4:00 pm local time. However, along with the Japanese stations I had contacts with New Caldonia, Republic of Korea, China, Asiatic Russia, Australia, Taiwan, Hawaii, Indonesia, and Washington. I decided to go back Sunday morning April 3rd and try again. I arrived at around 8 am, setup and started transmitting again. I wasn't getting pounced on by POTA hunters and DX'ers as in previous activations, to I switched to 15 meters and things started piling up. Unfortunately, around 11 am my amplifier stopped working. The KX3 was putting out a signal, but there was only a small trickle of power coming out of the amplifier. There were no over-heat indications. I tried shutting down and restarting. Taking a break to let it cool down. But nothing seemed to revive the amp. So, I shut things down and packed the kit back up. Fortunately, I was still able to make 50 QSOs, so the POTA activation still counted.